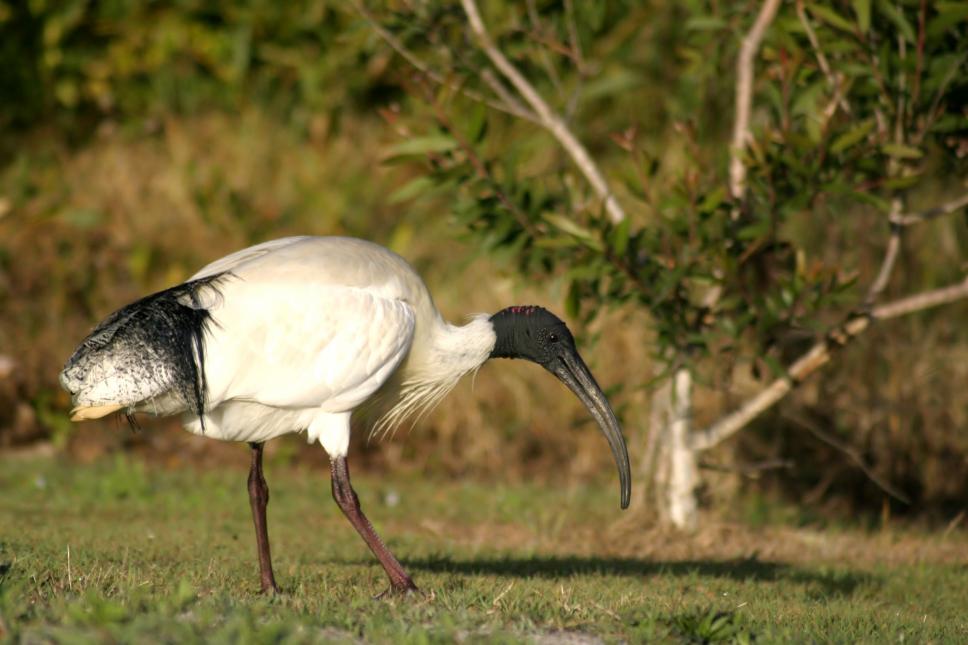 Australian White Ibis is a native bird that is common and widespread in northern and eastern Australia. Its preferred habitat is swamps, floodplains and grasslands, however it is also commonly seen in urban parks and gardens. Ibis can be seen regularly throughout the Camden LGA particularly in the parks and garden areas, for example at Lake Annan, Mount Annan.

The Australian White Ibis is a very adaptable species that has a bad reputation because they are known to eat human scraps, including those from tips and for this reason they are often called ‘Tip Turkeys’. Its preferred diet consists of a range of food including both terrestrial and aquatic invertebrates.

The Ibis are native but not to the urban environment. The large populations in Sydney, including Lake Annan, Mount Annan are due to human impacts. Their natural inland wetlands have been degraded by increased agricultural water extraction, habitat loss and harsh drought. The plentiful supply of food in the urban environment i.e. open landfills and direct feeding by humans, has allowed the urban Ibis population to boom in recent years.

This bird has become a common fixture within the Camden LGA, particularly at Lake Annan, Mount Annan. During the breeding season (July to December) the numbers increase significantly, impacting on local residents due to the noise and the smell that they create. They also impact the local environment as they remove native vegetation and anything else they can find to build their nests, and pollute local waterways with their waste.

To manage the population and the overall impacts that the Australian White Ibis has on residents and the local environment, Council adopted a Management Plan for the Australian White Ibis at Lake Annan in 2013. In December 2016, floating wetlands were installed surrounding the island within Lake Annan, to improve the water quality of the lake. An Addendum to the Management Plan was adopted in January 2019, to include the floating wetlands within the management area. This species is protected in NSW and as a result, Council is required to obtain licences from the NSW National Parks and Wildlife Service to enable some of the management strategies, such as egg oiling and burning of a portion of abandoned Australian White Ibis nests to be implemented.