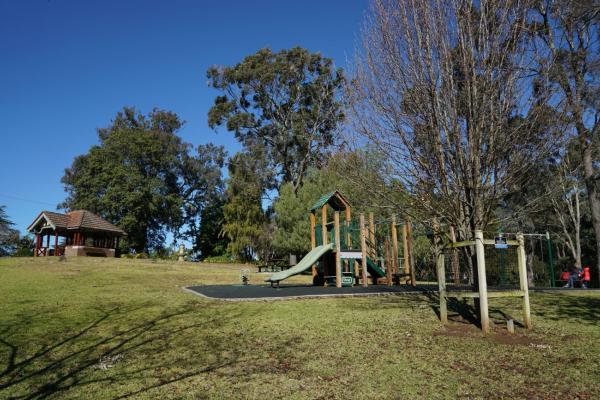 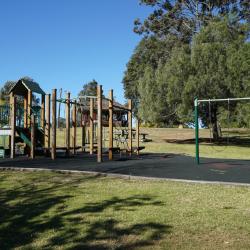 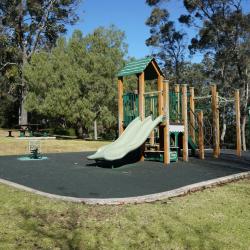 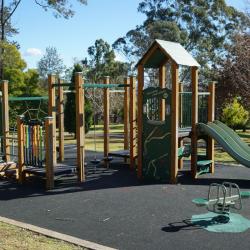 Under the terms of the ‘Deed of Gift' Council holds the land ‘In Trust' for the people of Camden, for all times.

There are a number of conditions to the gift for example:

The official opening of the park was held 10 October 1906 and was officiated by the donor, in the presence of a large gathering of the community. The original fence is still standing and the tender called for its construction required it to be ‘sheep proof'.

From the park a glorious vista of the surrounding district is obtained. The range of hills to the south is Razorback Range - about 350 metres high. Slightly west is Mount Hunter - 295 metres high - so named by Governor Hunter in 1796 whilst in the area was named ‘The Cowpastures'. To the west are the Blue Mountains. To the east can be seen the Macarthur Homestead, known as Camden Park.

Located in Menangle Road, the park is a small part of John Macarthur's last grant, call his ‘North Camden' grant, covering 5,400 acres and granted to him in 1825, only 8 years before his death, when the whole Estate was about 33,000 acres. The park was a gift to the people of Camden by the last Mrs Elizabeth Macarthur-Onslow, a grand daughter of John Macarthur. In those days Camden was really a ‘rural' village with virtually no residential blocks beyond Murray Street. Menangle Road was a dirt track winding out past the park and Hospital towards the Camden Park dairy homestead and the Estate itself.

In accepting the gift, the Council of the day decided to name the area ‘Macarthur Park' in honour of James Macarthur, the donor's father. The gift was made on 8 June 1905, and its original areas was 6 acres.

In 1910 a further tree planting programme was carried out and town water was laid on, so the trees could be watered. Again in 1912 a further planting of 100 trees was made. The public subscriptions raised to honour Mrs Elizabeth Macarthur Onslow who died in 1911, were used for the purpose of constructing the ‘shelter', opened in 1913.

The building, with a simple basic floor plan, has quite an interesting roof structure. Over the years it has seen many uses - not only as it was tended to shelter people ‘from the heat and burden of the day' but as a place where the town band performed and a special enjoyment. For many years the southern end was closed in to make a gardener's room. During World War II the room was used as an observation post by the local observer Corps.

In 1920 just after World War I, the Council was considering various suggestions as to what would be a suitable ‘Soldiers Memorial' for construction in the park.

The four wooden gates are basically as those first constructed, fortunately over the years any repairs made have been a copy of the original materials. The fence builder was John Comyns. Fred Dowle was awarded the contract to plough the beds ready for tree planting. The local MP, Mr F Downes, secured a grant of fifty pounds from the State Government and a similar amount was subscribed by residents. The princely sum of one hundred pounds was used to buy trees and shrubs.

Two palm trees planted on that day in 1906 on either side of the main vehicle entrance off Menangle Road can readily be identified. The palm trees on the southern end of the memorial gardens were planted by local returned soldiers after the 1914 - 1918 war.

The wheels of the Turkish gun were restored in 1979 by the Council and wheelwright Mr Tom Peel of Theresa Park. The barrel of this gun is heavily inscribed in Arabic. The sun dial was a gift from Miss A Furner, it had for many years graced her parent's garden in Menangle Road.

The park has seen many changes in design over its 80 years. In 1964 the rose garden section was planned and laid out. The following year 80 roses were planted. The sandstone edging came from early guttering laid in the township in the 1800's. The W H Anderson Memorial Drinking Fountain in its present peaceful location has had a colourful past. It's former location was at the intersection of John and Argyle Streets in the centre of Camden. After two mishaps involving runaway horse wagons at the intersection, the Council decided that it should be removed and erected in the park in 1937. It originally was surmounted by a 2 feet high glass gas light and had two spring loaded brass taps with metal drink vessels fastened to the column with chains. At the base of the fountain is a stone drinking trough for the use of dogs.

The Pergola and Paved Walkway ‘Wisteria Walk' a recent Landscaping Project completed in July 1983. The sandstone work used in this project was saved from several old kerbed Camden streets. The State Government helped finance this scheme from a Wages Pause Programme. It was completed in December the same year. The Pergola was covered with six different flowering Wisteries.

The Rose Garden which is off the Park Street entrance is a new project and was constructed with assistance from the State Youth Corps Employment Scheme and completed in February 1984. 120 modern roses of 30 different varieties are grown in this section, the total number of roses planted in the Park including this new section is 320.

The present cenotaph was created and built by the late Percy Butler and was paid for by public subscription. Later in 1922 it was unveiled by Mrs Hector Small, a widow of one of the soldiers killed in the war. That same year the memorial gates were presented as a gift of the late Dr F West, and unveiled by Miss Macarthur Onslow. The sandstone cenotaph and entrance came from the Moore property at Mount Hunter. The stonemason was Mr W Kerwin, also an Alderman of the Council.

The three guns around the cenotaph were received in 1920 from the Federal Government to form War Trophies as part of the Local War memorial grant. The guns comprise two German Field pieces and one Turkish Field Gun.