Construction of a new playground that balances interactive play spaces for young children with passive open space and picnic areas. 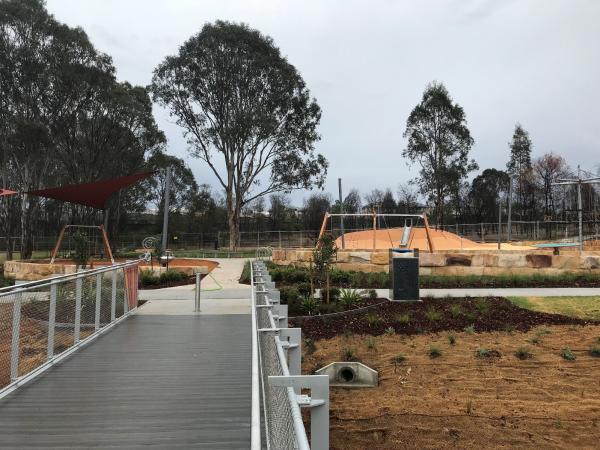 Project Outcome: Construction of a new playground with an extensive range of play equipment, shade structures, seating and landscaping.

In January 2017, Council consulted with the community through the 'Your Parks Your Voice' portal to ask residents what they would like to see in a new play space and surrounds off Bandara Circuit, Spring Farm. The feedback received was used to develop the park design.

The park design aims to provide a balance between interactive play spaces and equipment for younger children as well as passive open space and picnic areas. The design incorporates the natural landscape of the site to create a unique, attractive and engaging play space.

Works associated with this project will include the construction of a new playground with an extensive range of play equipment, seating and landscaping. Shade is being provided by a combination of two shade structures over the younger children's play areas and using the existing established trees in the bush corridor setting. A new pedestrian bridge will also be constructed to provide access from the street.

Works commenced in late April 2018 and were completed on schedule in late September. The park was opened to the public in early October 2018.